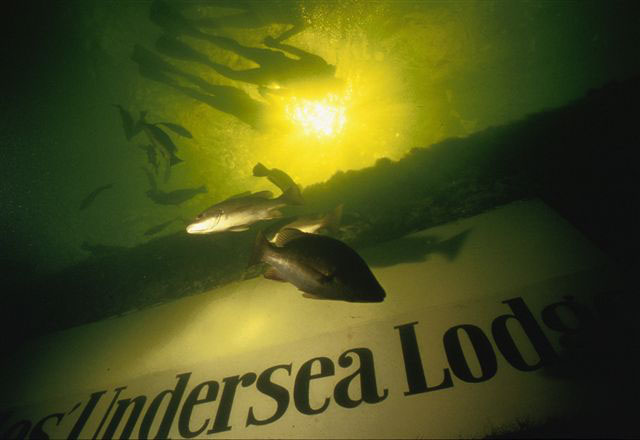 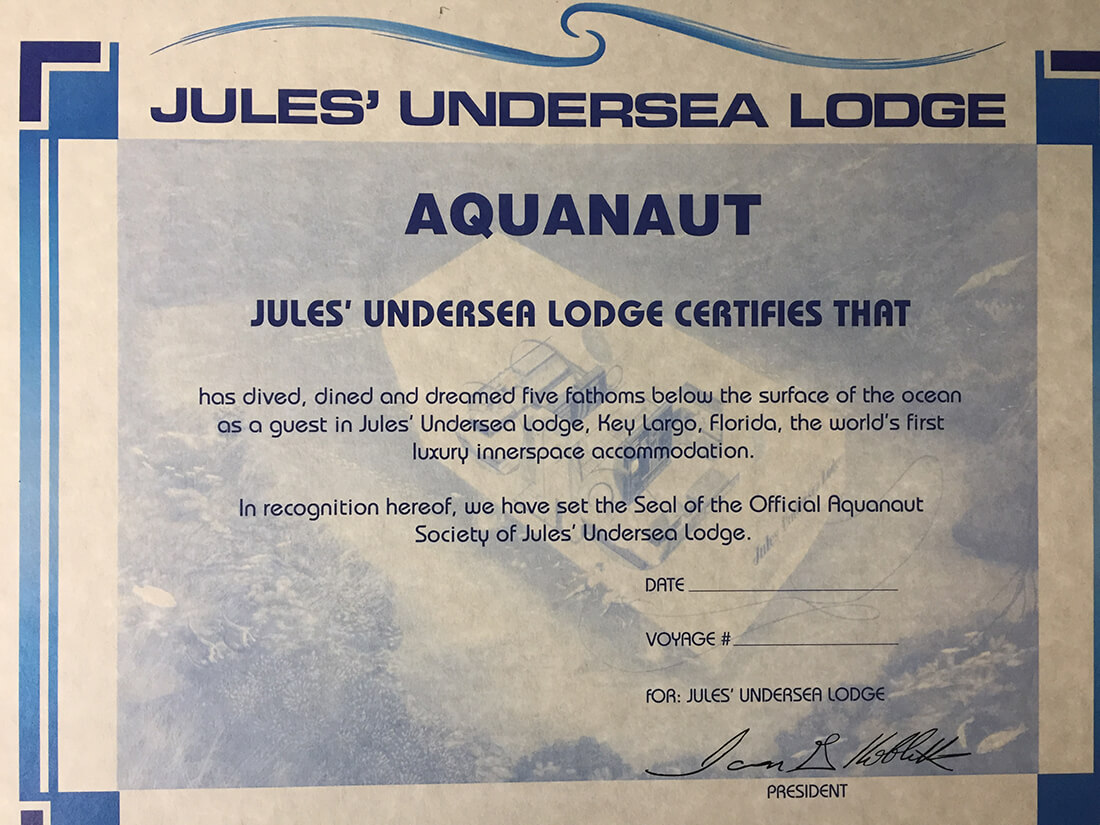 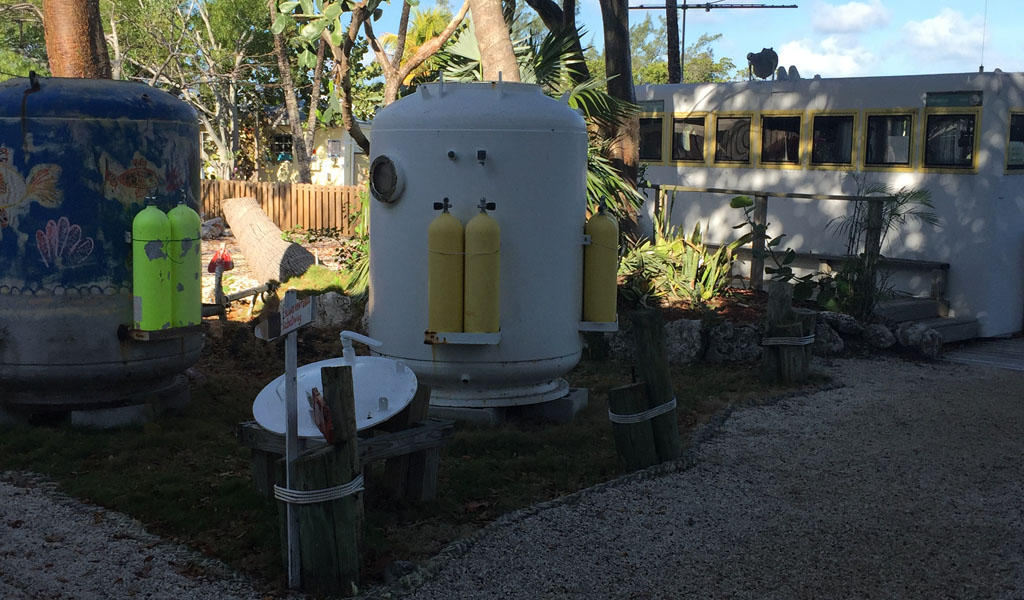 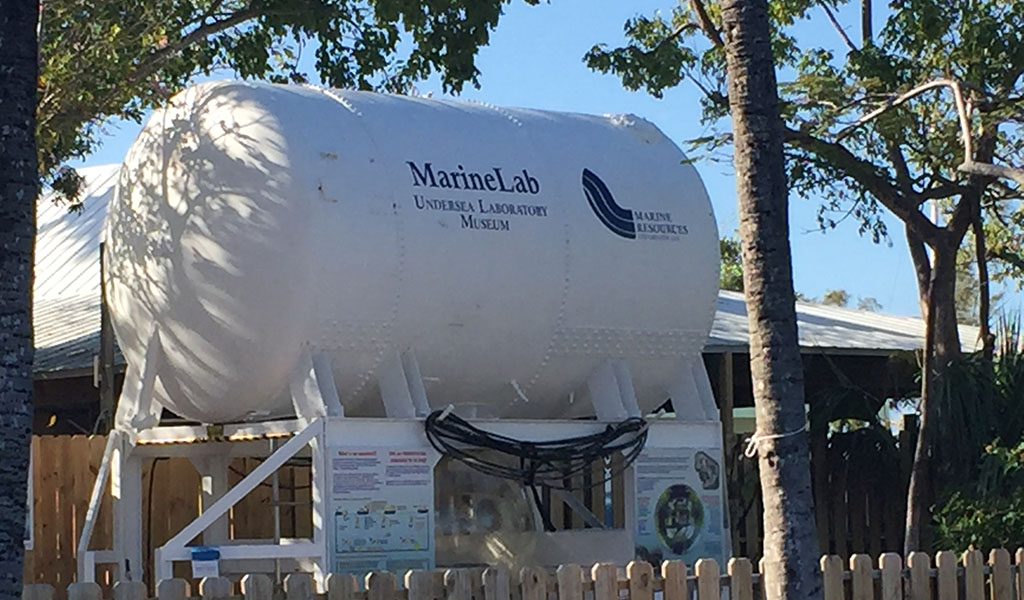 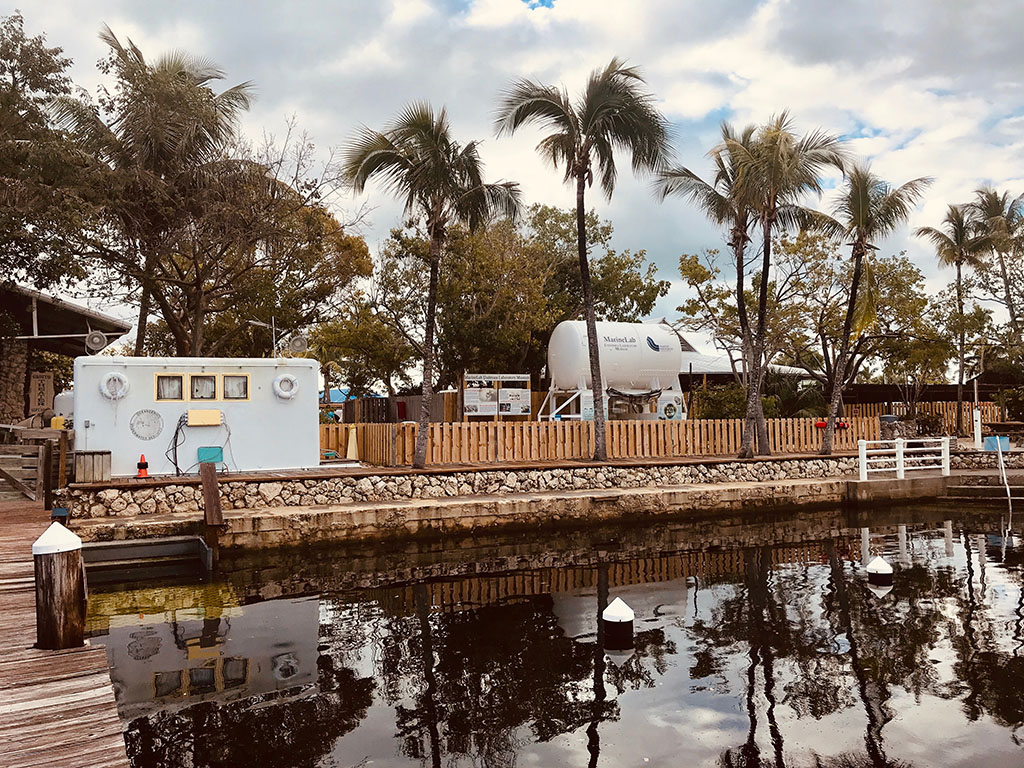 Although the underwater hotel may sound like the latest tourist fun spot, Jules’ Undersea Lodge, actually began its existence as La Chalupa research laboratory, an underwater habitat used to explore the continental shelf off the coast of Puerto Rico. The authenticity of the underwater habitat is what really sets it apart from amusement parks and other similar attractions. The mangrove lagoon in which Jules’ is located is a natural nursery area for many reef fish. Tropical angelfish, parrotfish, barracuda, and snappers peek in the windows of the habitat, while anemones, sponges, oysters and feather duster worms seem to cover every inch of this underwater world. Guests of the Lodge explore their marine environment with scuba gear provided by Jules’ Undersea Lodge and are given an unlimited supply of tanks. Jules’ Undersea Lodge may have a comfortable futuristic decor, but its sense of history is inescapable. It is the first and only underwater hotel where scuba diving is the only way to get to your room.   Jules’ is also the first underwater research lab to have ever been made accessible to the average person. 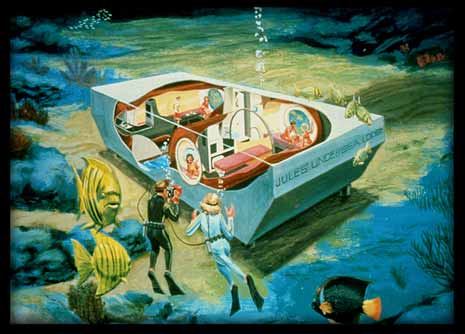 “Marine life is actually enhanced by the presence of an underwater structure”, explains Ian Koblick, owner and co-developer of the Lodge.

“Jules’ Undersea Lodge serves as an artificial reef, providing shelter and substrate for marine animals. And the flow of air to the Lodge constantly adds oxygen to the entire surrounding body of water, creating a symbiotic relationship between the technology of man and the beauty of nature.” 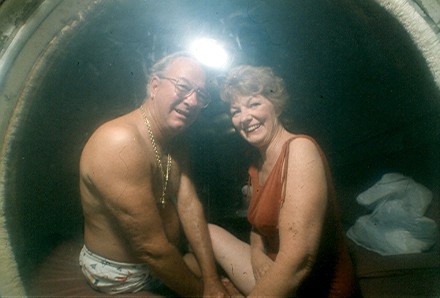 Mr. Mel Fisher and his wife.

The entire structure of Jules’ Undersea Lodge is underwater, sitting up on legs approximately five feet off the bottom of the protected lagoon. The Lodge is filled with compressed air, which prevents the water from rising and flooding the rooms. A five by seven foot “moon pool” entrance in the floor of the building makes entering the hotel much like surfacing through a small swimming pool. Divers find themselves in the wet room, the center of three compartments that make up the underwater living quarters. The wet room, as the name implies, is where divers leave their gear, enjoy a quick hot shower and towel-off before entering the rest of the living area. Designed for comfort, the air conditioned living space has two private bed rooms and a common room. The eight by twenty foot common room is a multi-purpose room providing the galley, dining and entertainment areas.  Jules’ Lodge is equipped with an intercom, WiFi, Amazon Fire Stick, and DVD’s so you can watch some of our suggested movies.  But the main focus of attention is the big 42 inch round window that graces each room. “Waking up to view a pair of angelfish looking in your bedroom window is a moment you’ll never forget”, states Koblick. 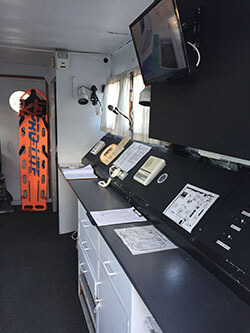 Habitat operations are monitored by the Mission Director from the land-based “Command Center”, located at the edge of the Emerald Lagoon. The control center is connected to Jules’ Undersea Lodge by an umbilical cable which delivers fresh air, water, power, and communications. “The entire facility is monitored 24 hours a day by our staff”, says Koblick, “the Lodge has independent support systems as well as redundant backup systems. We’ve taken every step to ensure a safe yet exciting adventure for our guests”.

The staff of Jules’ Undersea Lodge remains on duty 24 hours a day to provide whatever services the quests may need. If you choose to include a prepared meal the Lodge’s luxury packages include the services of a “mer-chef” who scuba dives down to the hotel to prepare and serve a gourmet dinner. Birthday or anniversary celebrations often include surprise bouquets of flowers and cakes. 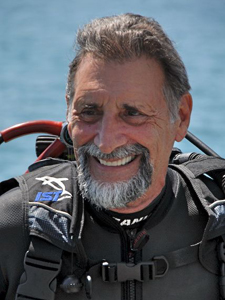 Credit for developing this venture must go to both Dr. Neil Monney and Ocean Explorer, Mr. Ian Koblick. With over 50 years of combined ocean research and industry experience the two principal developers named their undersea retreat in honor of Jules Verne, author of “Twenty Thousand Leagues Under the Sea”. Jules’ Undersea Lodge is a tribute to the human quest for exploration and adventure. In the early 70’s, lan Koblick, president of Marine Resources Development Foundation, developed and operated La Chalupa research laboratory, which was the largest and most technologically advanced underwater habitat of its time. Koblick , who has continued his work as a pioneer in developing advanced undersea programs for ocean science and education, as the co-author of the book “Living and Working in the Sea”, is considered one of the foremost authorities on undersea habitation. Co-developer Neil Monney formerly served as Professor and Director of Ocean Engineering at the US Naval Academy. Monney has extensive experience as a research scientist, aquanaut, and designer of underwater habitats. Together, the two men have developed and managed undersea habitats that have produced more aquanauts than all of the other undersea habitats in the world combined. Their combined expertise is evident in the careful attention to detail in Jules’ Undersea Lodge.

Guests of the Lodge have included many celebrities, including former Canadian Prime Minister Pierre Trudeau; rock stars Steve Tyler of “Aerosmith” and Jon Fishman of Phish.

Larger underwater lodges are on the drawing board for the future. “We have been approached by developers from around the world. The basic design has been completed– future hotels will feature an original design using concrete and acrylic–they will be substantially larger and provide even more gracious comfort with spectacular views through six-foot diameter windows”, says Dr. Monney. “To live beneath the sea was once just the dream of science fiction writers… Now it is a reality. Here is a new step for mankind, the advent of undersea living, the taming of the last frontier on Earth… Inner Space”.

With pride, the developers invite the world to visit–to really live beneath the surface of the ocean at Jules’ Undersea Lodge. 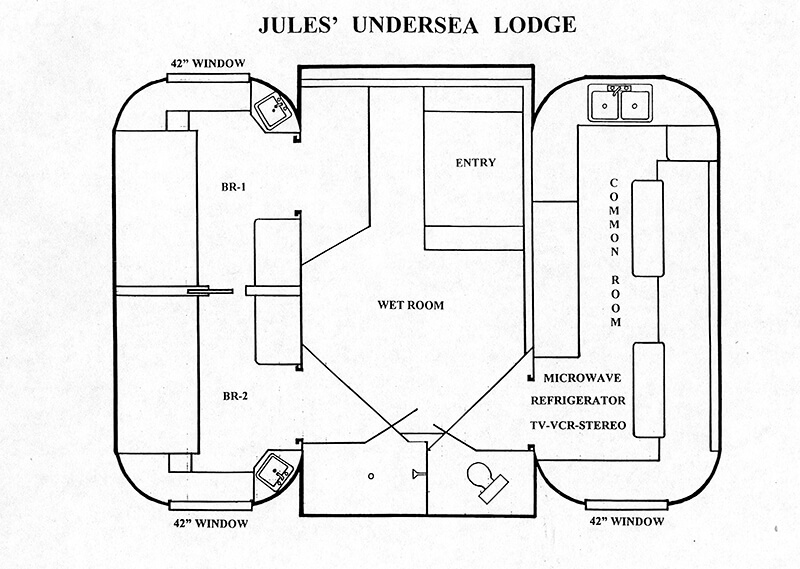 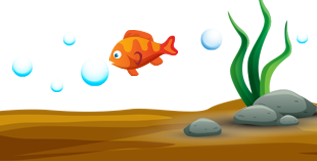 Jules’ Undersea Lodge
is happy to announce the reopening of our world famous lodge.

We will be taking reservations starting in May, 2021. 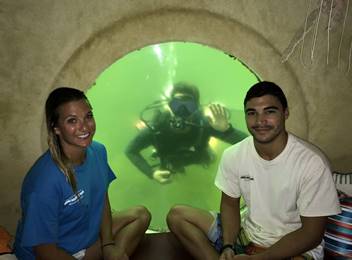 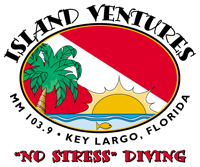 Key Largo Undersea Park, Inc. would like to thank our Military, First Responders, Doctors and Nurses for your service. Stay Safe. 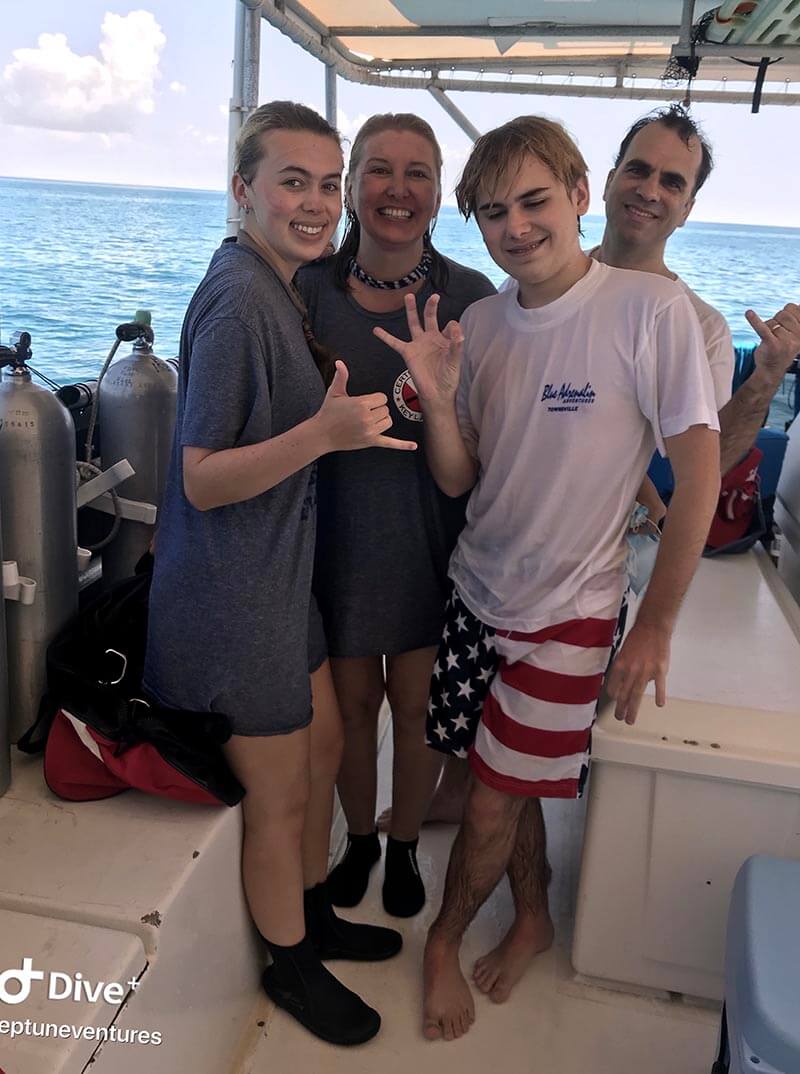 Learn to Dive with Daniel